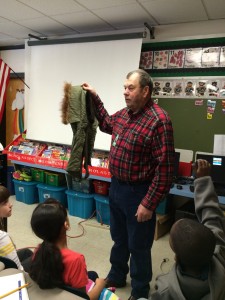 Mr. Berube shows the class the hood of his jacket which was rimmed with wolverine fur. 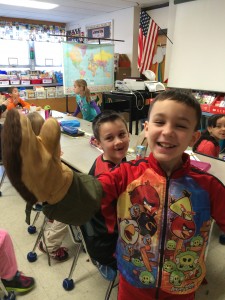 Dominic tries on Mr. Berube’s glove that he used in Antarctica. 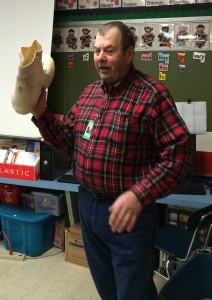 Mr. Berube had a boot like this when he was in Antarctica but he had to return it to the Navy. (He bought this one on eBay!) 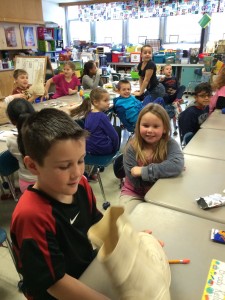 Brady checks out the boot while Alyssa waits her turn. 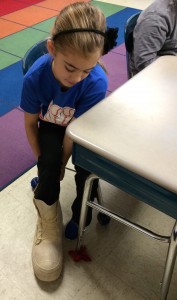 Hannah guessed that she could fit her foot, shoe and all, inside the boot…and she did! 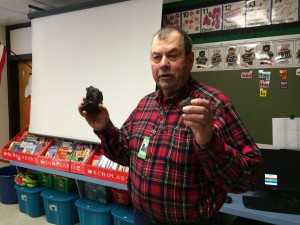 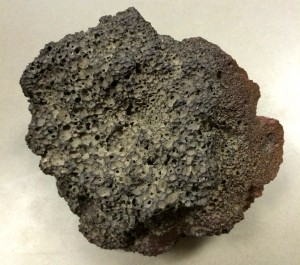 This rock was from the surface of the continent of Antarctica. 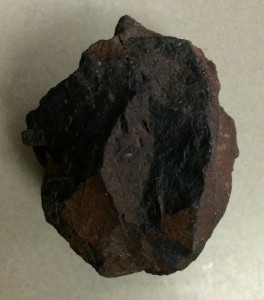 This is a piece of lava from Antarctica’s active volcano, Mount Erebus. 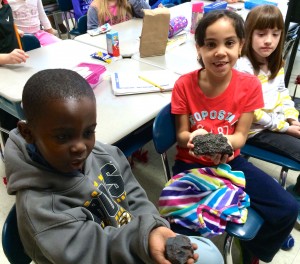 Brian and Victoria feel the weight of the two rocks from Antarctica. Ask your child which one was heavier!

On Tuesday, we were fortunate to have a special visitor, Mr. Berube, who came to talk to the children about Antarctica. Mr. Berube is a Dracut resident and a former Navy Seabee who spent time working and living in Antarctica when he was a young man. He showed the class a DVD about Antarctica. Then he showed photos that he took while he was in Antarctica and told the children about his experiences there. Then he brought out a number of artifacts from his time there from clothing to rock samples. He let the children touch these objects and patiently answered their questions. This was a great introduction to the next model curriculum unit on Animals and Habitats of Antarctica and the Arctic, which will combine social studies, science and language arts. Thank you Mr. Berube for visiting our second graders once again this year.

Having a ball in the gym!

After our visit with Mr. Berube, our class went to physical education. When I went to pick them up after their class, I could hear them laughing and having a great time. I looked in the large doors and saw them playing a game I had never seen. Coach Rivers told me it is called scooter ball. They were having so much fun that I just had to take a photo to share with our C8 families. Physical education at its best! Nice job Coach Rivers! 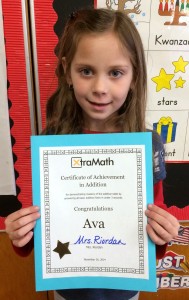 We have a new Xtramath Superstar! Congratulations to Ava S. for completing the Addition level of Xtramath and moving on to subtraction! We are all proud of you! I wonder who will be our next Xtramath award recipient. 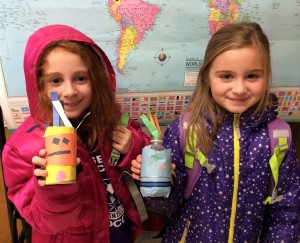 Finally, as part of our Traditions and Customs unit, our class saw an educational video called Holidays for Children: Pow Wow. This video taught the children about Native Americans traditions and customs. One part of the video has a woman explaining step-by-step how to make a Hopi Native American kachina doll. Today, Mary and Mia surprised me by showing me that they had gone home and made their own kachina dolls. I was very impressed that these girls took the initiative to take what they had learned at school and make them at home.  I love it when students take ownership of their learning!  Proud of these creative young ladies! 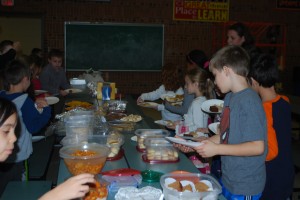 The students didn’t need any coaxing to try new foods! 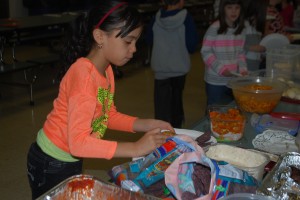 Victoria sampling some of the donated treats. 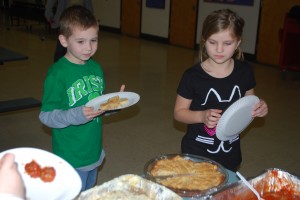 Nick and Elizabeth try to decide where to start. 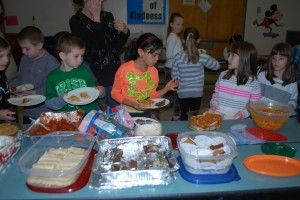 So many delicious choices! How do you decide what to eat? Try a little bit of everything! 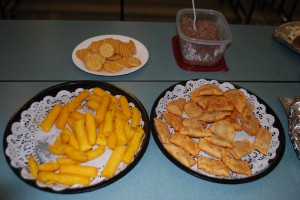 A close up of some Canadian French and Puerto Rican delicacies! 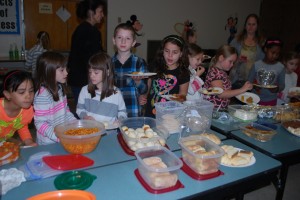 Our second graders got to experience a wide variety of ethnic foods. 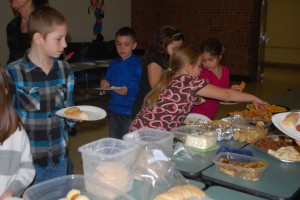 I think I’ll have some more since it was so yummy!

On the half day before Thanksgiving, we had a “Tasting Day” celebration in the cafeteria as part of our Traditions and Customs Language Arts and Social Studies unit. Our C8 families donated a wonderful selection of food that reflected the heritage of our students. We had food from Canada, Ireland, England, Sweden, Kenya, Puerto Rico, India, and many more countries. The students loved the delicious food and many went back for seconds! A HUGE thank you to all the families that provide the food that made it a rich experience for all our students. I truly appreciate the time and effort involved, especially at a busy holiday time. Thanks also go out to Mrs. Ware and Mrs. Joyce for volunteering to help out at the tasting day. Thanks go out as well to Mrs. Mullins, our art teacher and Mrs. Morning, our Title I teacher who also pitched in to help set up. You all helped make the event special for the children and made my job so much easier! P.S. Special thanks to Mr. Kelleher who made a special trip to deliver the food that accidentally made the trip to his workplace instead. Way to go above and beyond, Dad!! What a special day and a special way to start the Thanksgiving break with our second grade friends!

Before and after our Tasting Day celebration, our children watched a Virtual Field Trip to the Mayflower and Plimoth Plantation on the Scholastic Website. They got to see inside the ship that the Pilgrims used to travel across the Atlantic Ocean and learn about their voyage. Then they saw Plimoth Plantation and saw inside several buildings there. They learned about how the Pilgrims lived on a daily basis. After that, they “visited” a Wampanoag settlement and saw how the Native Americans lived. Finally they listened to an “interview” of  Pilgrims and Native Americans at Plimoth Plantation who described what the first Thanksgiving feast was actually like. I hope watching this amazing resource helped to put the holiday into perspective for them. 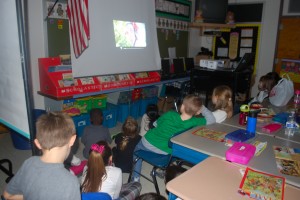 The children were really engaged in this “virtual field trip!” 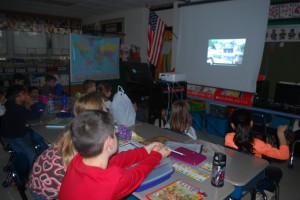 The students are now excited to visit Plimoth Plantation for real. This is often a Brookside third grade field trip so they may get the chance to go next year.