Today we had a special visitor, Mr. Berube who taught us about Antarctica. He is a Dracut resident who traveled as a Naval Seabee to Antarctica when he was 24 years old. 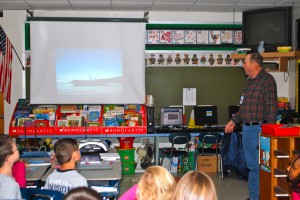 Mr. Berube was stationed for four months at McMurdo Station. He showed the class photos from his time there in the 1960’s. Mr. Berube told about his experiences there and answered all the children (and adults) questions. He also shared a National Science Foundation DVD about Antarctica with us. 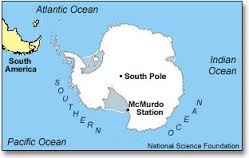 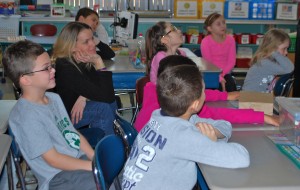 The children were attentive and seemed to enjoy learning about live on this faraway continent. Sal was so excited he kept saying “I am so going there!” 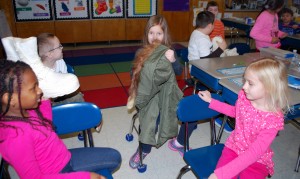 He brought in some of the clothing that he used when he was stationed in Antarctica. Avery is holding the hood from his parka and the children got to feel the wolverine fur.Here the children are passing around the warm gloves he needed when he was there. 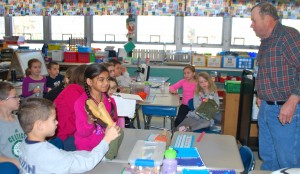 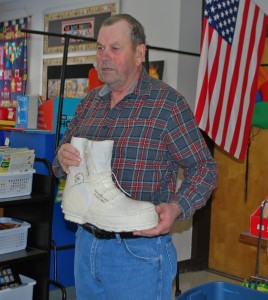 Mr. Berube brought in some rubber boots like the ones he wore in Antarctica. Mr. Berube explaining that these are the actual boots he wore in the Navy because he had to return those. 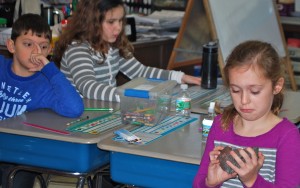 One of the favorite parts of the visit was when Mr. Berube pulled out two rocks from Antarctica and he let all the children touch them. How many people can say they have touched a rock from Antarctica? 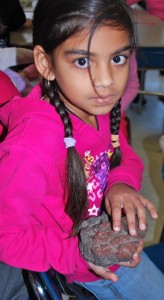 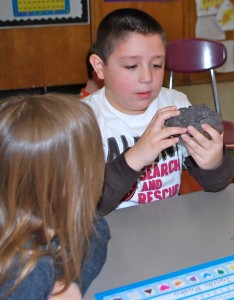 Thank you Mr. Berube for spending time with us and sharing your knowledge and experiences with our second grade class! 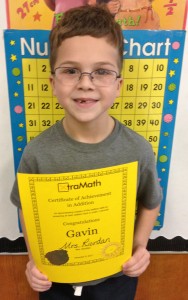 We have another Xtramath Superstar! Gavin L. has mastered the addition level.  Congratulations Gavin! On to subtraction!

The children asked if I would extend the deadline for the Scholastic Book club order until tomorrow. Please have all orders sent in to me or online by tomorrow! 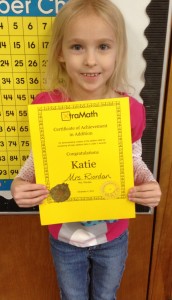 Congratulations to Katie L. for completing the addition level of Xtramath! She completed it last week and received her certificate today. Xtramath is a valuable tool for increasing the students’ fluency with math facts which means knowing them instantly without having to stop to think about it or use a strategy (like counting on fingers) to get the answer. When the students know their math facts this well, it makes learning more challenging math concepts easier to learn.

I try to let every student have the opportunity to do Xtramath every day but that is not always possible for reasons such as the Internet access being unavailable or my needing the students to all be with me for certain lessons or tests. Some days we don’t get everyone finished or if the Internet was down, no one gets it done at school. But that didn’t stop Katie who would go on Xtramath at home instead…..even on the weekends! As you can see, all her hard work certainly paid off! On to subtraction for you Katie!!

But that’s not all….Gavin L. just completed the addition level in class today! Hooray Gavin! He’ll get his certificate tomorrow. I wonder who will be next!

Finally, a quick reminder before I end this post that the December Scholastic book orders are due on WEDNESDAY. You can order in with cash or check sent to school or online with a credit card. 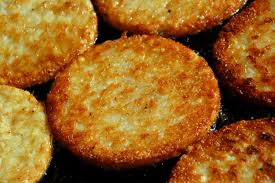 I forgot to take a photo but this image looks like what they ate. I cheated a bit and fried crispy crowns to save time but they got the idea.

Today we made “latkes” and ate latkes and applesauce to help us learn about some Hanukkah traditions as part of our Traditions and Customs unit. The children all loved them and our classroom smelled wonderful for the rest of the day! Then the children wrote a paragraph about latkes as part of their writer’s workshop.  Later, the class brainstormed on a venn diagram things they knew (or thought they knew) about Hanukkah and Christmas. At first they thought the two holidays didn’t share much in common. But after we did a read-aloud of “Light the Lights : A Story About Celebrating Hanukkah and Christmas”, they revised their venn diagram and realized that there are many things common to the two holidays.

Our Scholastic book order came in today and I distributed the books to the students who ordered books. A new order form went home with the children today and is due Wednesday, December 11th. Keep in mind that the books from this order will probably not be in before Christmas break. Our parent volunteer today thought it might be helpful to remind everyone that purchasing books through the classroom is not only a great deal for you, it has the added benefit of providing the classroom with bonus points which can be used to get “good stuff” for our classroom. I also want to point out something new this year with Scholastic. Each month they choose one book and if 5 students order that book, the classroom receives a free copy of that book. This month’s chosen book is about Polar Bears.