It was a beautiful autumn day for our second grade to go outside to the parking lot to bring two huge dinosaurs to life. It started with parent volunteers and teachers working together to draw the giant grid on the parking lot. Then the parents drew life-size outlines of a Brachiosaurus and a Tyrannosaurus Rex. After lunch, all the second grades went outside and worked hard to bring the outlines to life by coloring in the enormous prehistoric creatures with colored chalk. 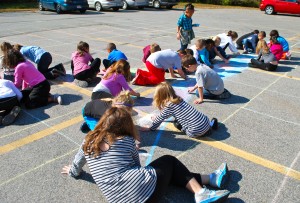 The second graders worked hard to color in the dinosaurs. 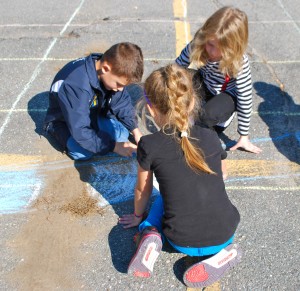 Coloring the tail of the Brachiosaurus. 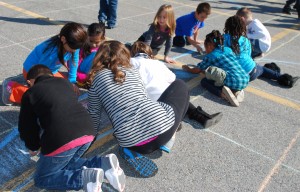 Coloring a dinosaur can be HARD WORK! 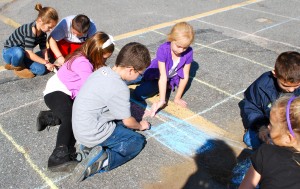 Wow…this is taking a long time. 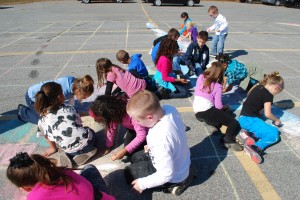 First the students looked at the Brachiosaurus and learned that it was the size of a FOUR STORY building!

The students sat around the perimeter of the Brachiosaurus. 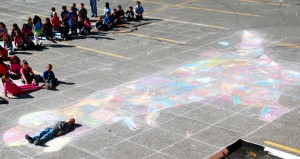 OH NO!! The Tyrannosaurus Rex is eating one of the second graders!!

After the coloring was done, they proudly examined their work and realized just how large the dinosaurs were. This hands-on collaborative activity is a powerful way for the students to truly comprehend the enormous size of the prehistoric creatures that they have been studying.

Thank you to all the parent volunteers who helped make this activity so successful. Additional thanks to the teachers who parked in other locations so we would have the large area to make our dinosaur grid.